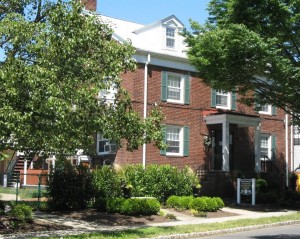 In the 1920’s, under the aegis of the Thursday Morning Club (TMC), a building, now known as the Madison Community House (MCH) and located on Cook Avenue, opened its doors. The building was made possible by a bequest in the 1920 will of Mrs. Mary B. Cash, a late member of the Thursday Morning Club. The building was known then as a Settlement House and was opened to serve “the people of Madison as a whole” regardless of “color, creed or nationality”.

Prior to opening the Settlement House on Cook Avenue, the women of TMC started their settlement work in January of 1909, in a room on North Street which served as a recreation and medical center. Miss Cora Payn, whom they had hired as district nurse in 1906, was installed to direct and oversee their work. When the club rented the Brittin Homestead at 36 Main Street in 1911, Miss Payn became the first Settlement Director.

The GFWC Thursday Morning Club, embarking on its mission of service and aid to the Madison community in 1896, still owns and operates the MCH as a service and recreational facility. Responding to the needs of the community, the MCH has been the home for many community services including “Baby Keep Well Station” (prelude to the Madison Health Department), the first supervised town playground (now Dodge Field), morning kindergarten (now part of the
Public School System and numerous other services that still serve the Madison community today.

Current House-sponsored programs include a Preschool for 3 & 4 year olds, a Before and After School Child Care (BASCC), the Charter for Cub Pack #124 and various afterschool Enrichment Programs, just to name a few. MCH is also the home of Dress for Success, Northern NJ – 10 counties.

The TMC offers for rental the gym, social room, professional kitchen and meeting rooms for meetings, luncheons, receptions and other special events at a reasonable cost. MCH is open daily and the TMC continues to serve Madison and the surrounding community with this vital community center.

Owned and Operated by the Thursday Morning Club

Owned and Operated by the Thursday Morning Club
×
×